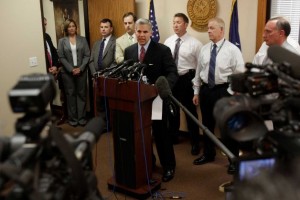 District Attorney Brett Ligon is the only Republican candidate who possesses the background, qualifications, experience and results that we need to meet the needs of our growing community and the demands of a changing public safety environment.  Ligon has a lifetime of experience in law enforcement. His career in criminal justice began immediately after receiving his political science degree from Texas A & M, when he joined the Montgomery County Sheriff’s Department and worked full-time while also attending and graduating from South Texas College of Law.

Brett’s commitment to law enforcement led him to the Houston Police Officers’ Union, where he joined the Office of Legal Counsel representing police officers. As Senior Staff Counsel Brett gained further insight into police investigations, grand jury proceedings, use of force and deadly force encounters, public integrity and civil rights matters, and a variety of other aspects of law enforcement to which most prosecutors and defense attorneys are not regularly exposed.

Ligon was elected District Attorney in 2009.  He quickly realized the need of specialized prosecutors to handle unique challenges in the court system. He has led the state in innovative prosecutions in Public Corruption and Public Integrity, Deadly Vehicle Crimes, Domestic Violence, White Collar Fraud and Environmental crimes.  As a conservative Republican his first priority is the protection of its citizens.

Brett and his wife of 22 years, Shannon, were both raised in Montgomery County.  They are the proud parents of Austin (16) and Morgan (10), and are active members of St. Matthias Catholic Church.